A New Co-Designed Model for Citizen Participation in Helsinki

This year the City of Helsinki is rethinking its approach to citizen participation and bottom-up citizen empowerment. The D-CENT project has impacted the roadmap of current e-participation tools in Helsinki by creating open processes, tools, code, and standards. The public beta of the democracy tool developed as part of the D-CENT Helsinki pilot has now been launched as Decisions Helsinki.

The EU-funded D-CENT project develops next generation tools for online democracy and participation. In Helsinki, the piloting has focused on creating ways for citizens to follow the decision making process of the City of Helsinki. 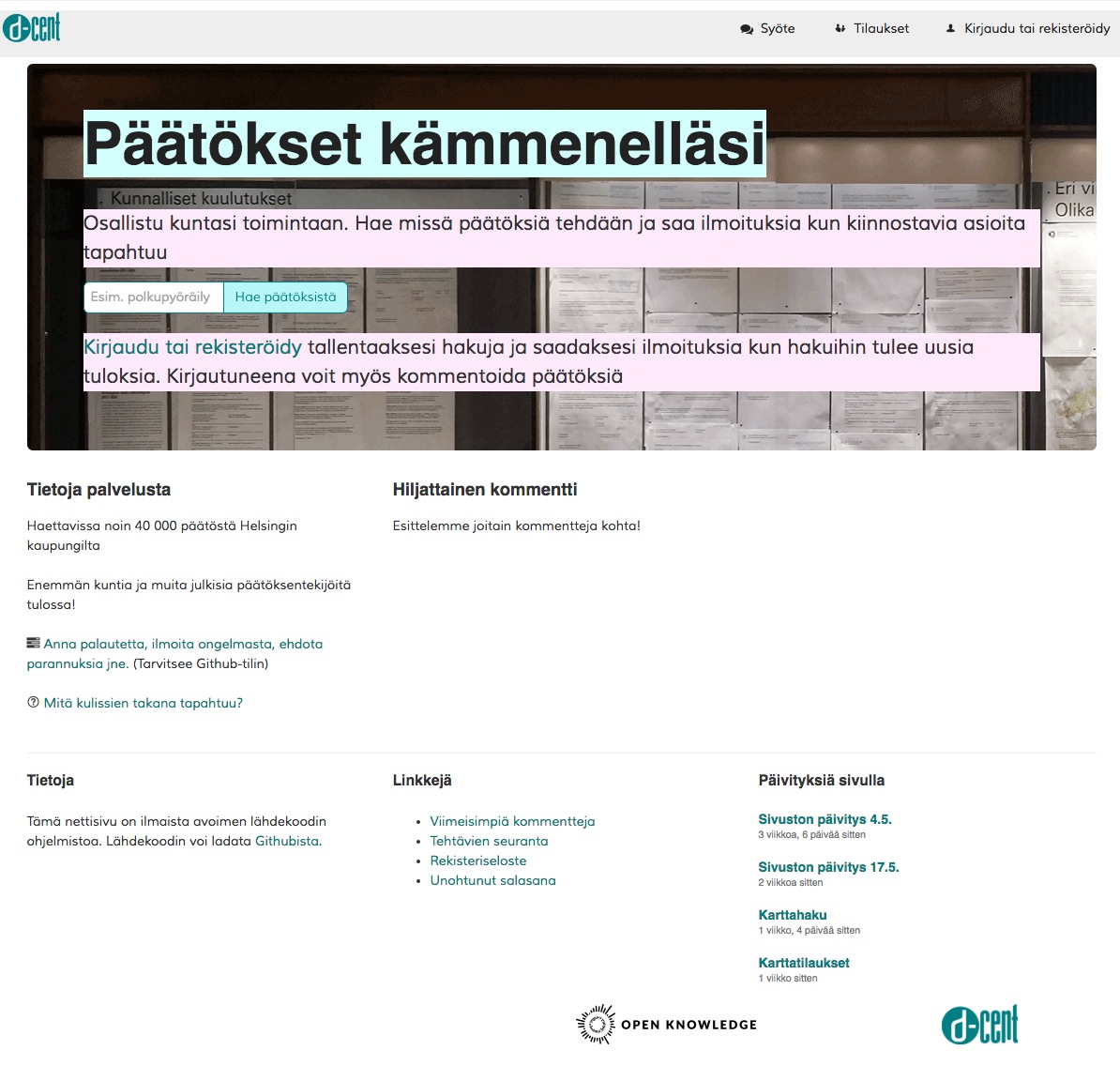 On the 25th of May, the public beta of the democracy tool developed as part of the D-CENT Helsinki pilot was launched as Decisions Helsinki. As part of the launch, Open Knowledge Labs Helsinki, Forum Virium Helsinki and the 6AIKA project arranged a joint event for local and national government representatives and developers to raise awareness on the D-CENT tools and especially the decision API’s and tools such as the one developed in the D-CENT project. An earlier prototype from 2015 can be viewed here.

The prototyping has been well-timed as the Six City Strategy is gearing up to expand the lessons learned to the other big cities in Finland. The Six City Strategy and Open and Smart Services strategy for sustainable urban development carried out by the six largest cities in Finland: Helsinki, Espoo, Vantaa, Tampere, Turku and Oulu. The strategy will be carried out between 2014 and 2020 and is funded by the EU with up to 80 million euros.

The decisions data API is one of the five API’s that will be synchronized across the six cities. It provides developers with all the decisions made by the City administrative bodies and individual civil servants in a structured format over an API. The D-CENT Decisions prototype and the user research carried out during the project will help make sure that the tools will benefit citizens in all the cities.

The City of Helsinki is increasing its efforts to develop open source tools that leverage the software and research findings of the D-CENT project. Most notably, the city council has decided that the whole citizen participation model of the city will be redesigned in the collaborative co-design effort during the second half of 2016 and rolled out in 2017. Contact between city representatives and D-CENT tool developers and partners in Reykjavik, Barcelona and Madrid help the City of Helsinki to utilise the best tools for citizen empowerment.

The new participation model benefits from the research findings of the D-CENT project. The City Council wants the new participation model to allow citizen ideas from different areas of the city to be linked to the formal decision making processes when the restructuring of the City’s departments takes effect in 2017. The council also required that the model include tools for participatory budgeting. Potentially this could mean a similar model of supporting bottom-up ideas on the city level and in the neighbourhoods as currently in Madrid (60 million euro in 2016) and Paris (more than 100m€ in 2016).

Helsinki is the first city to open up all of its decision making data in structured format. This means tens of thousands of municipal decisions annually as the data covers not only the Mayor’s decisions and the decisions of the City Board and City Council, but also the decisions of all the committees and boards of the city and the individual civil servants who make decision. The API – called Open Ahjo – provides the data in structured format with geo-location and keyword tags included. Traditionally municipal decisions have not been available to this detail. And the decisions that have been published online have been in PDF format to HTML at best making it very hard if not impossible to build any citizen engaging services using that information.

The internationally unique data opened by the City of Helsinki is an interesting testing ground for new citizen engagement tools. Although the data is public, there are as to date, no user-oriented and citizen-managed services that allow people to make use (get informed/notifies and to react to the decision data.

Helsinki is now researching what kind of bottom-up participation platforms it could provide to citizens and how it could integrate these platforms to the official decision-making processes of the city.

Helsinki is already leveraging the work done in D-CENT in its internal development projects and roadmap. For example, the open source Open City App – a native mobile app for Helsinki and any other interested City – has adopted the philosophies and technical solutions delivered in the D-CENT project. The users will be notified via the mobile app when there are decisions, events, reservations, news and other activities related to the city and their active citizenship.

The ongoing open source projects of the City of Helsinki (along with links to the Github projects) are showcased at http://dev.hel.fi/projects.