The global “Democratic Cities: Commons Technology and the Right to a Democratic City”, held in Madrid 23–28 May, produced a meaningful international dialogue between some of the world’s most outstanding players on issues surrounding technology, democracy and participation. Extracting Twitter data for hashtags #CiudadesDemocráticas, #DemocracyLab and #DCENTMadrid shapes a network that reveals vital details about the event.

The network resulting from the #DCENTMadrid, #DemocraticCities, #CiudadesDemocraticas, Democratic Cities event organized on the 23–28 May 2016. Picture by Pablo Aragón and Alberto Bicho.

The resulting graph, produced by Pablo Aragón and Alberto Bicho, confirms a dense, thick and fairly transversal network. After applying the modularity function, which groups together interrelated nodes, the network is split into different communities.

The orange community, composed of 535 nodes, revolves round the MediaLab Prado profile (@MediaLabPrado), the most influential of the whole event. The community includes MediaLab Prado users and some of the participants in the sessions that were being held in this space, like @bienpensado (Javier Arteaga), @urbanohumano (Doménico di Siena), @WikipoliicaJal and @urbanbetas.

The pale blue community, composed of 471 users, consists of Madrid-based institutions, such as the Reina Sofìa National Museum (@museoreinasofia) and Madrid City Council (@MADRID). One major point to note is the prominence of Madrid Mayor Manuela Carmena’s profile (@ManuelaCarmena), the node in this community with the most replicated content.

The green community, with 325 users, is clearly headed by the D-CENT Project (@dcentproject). It features influential international players in the fields of democracy and technology, most of whom use the English language. Particularly strong are the nodes for @nesta_uk (joint organiser of the event), @paulmasonnews (journalist Paul Mason), @RichDecibels (Richard D. Bartlett, founder of the Loomio tool), @francesca_bria (D-CENT co-ordinator) and @TreborS (academic Trebor Scholz).

In the purple community, comprising 265 users, the dialogue is woven by influential players in digital policy, social movements and technopolitics, like Julian Assange, Pablo Soto (in charge of Madrid City Council’s participation), Javier Toret and Baki Youssoufou (from French movement Nuit Debout). There is a sub-community, whose main node is Pedro Kumamoto, from Jalisco Wikipolitics. The purple community is a key one, as it connects almost all the conversations.

The dark blue community, with 104 users, is fairly mixed. Although most of its members are leading activists and Brazilian academics (like Sergio Amadeu, Raquel Rolnik, Marcelo Branco and Davi Miranda), this community also includes Birgitta Jónsdóttir (Pirate Party of Iceland) and Natalie Fenton (Goldsmiths University of London). 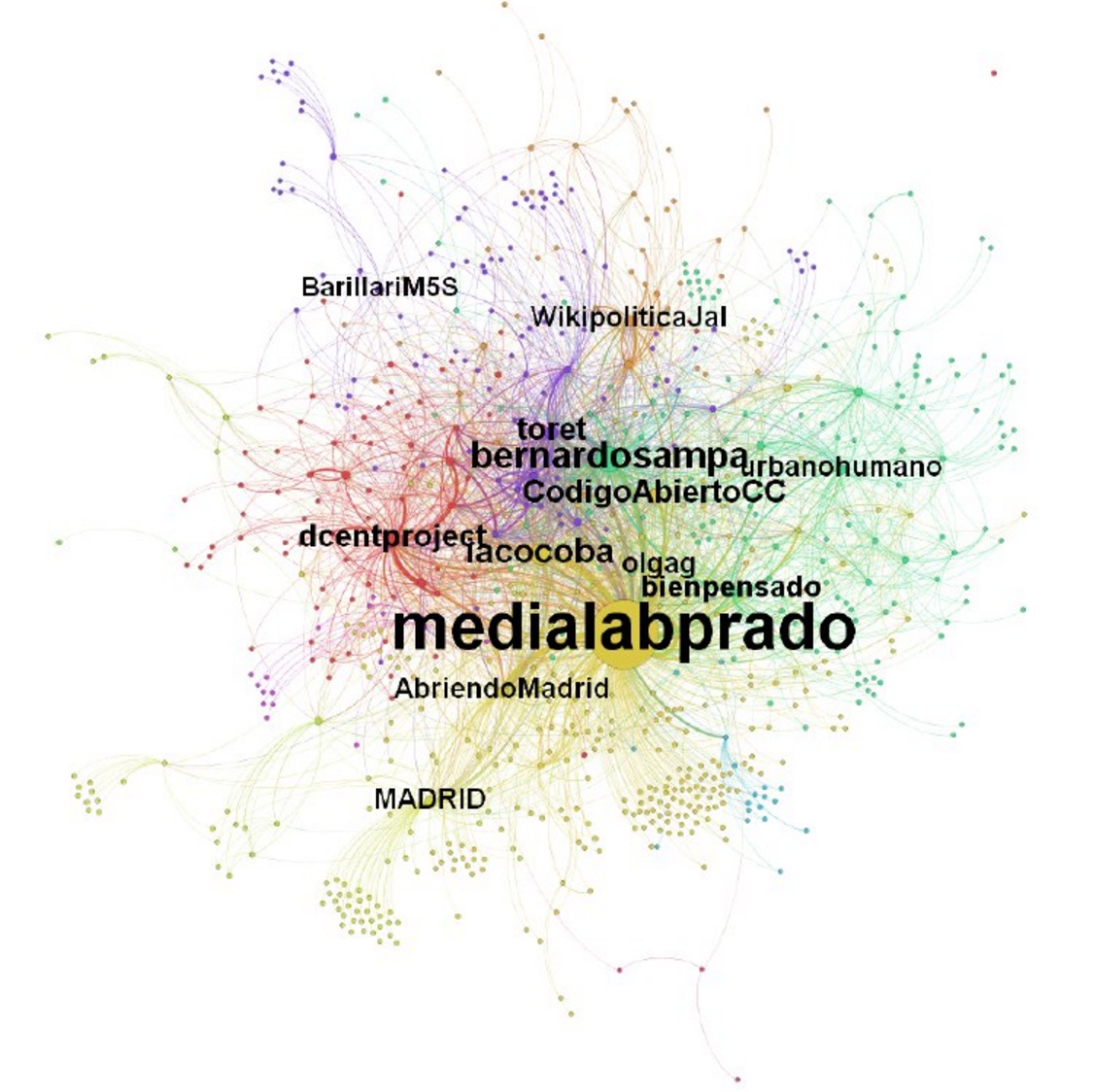 The network resulting from the #DemocracyLab, Democracy Lab event organised 23–27 May 2016. Picture by Pablo Aragón and Alberto Bicho.

The network resulting from the #DemocracyLab hashtag gives an overall view of the sessions, workshops and working groups held between 23 and 27 May at MediaLab Prado. A new feature of the graph corresponding to the whole event highlights the existence of a new community (green) with social movements, groups and players connected with the city. At the same time, applying the betweenness centrality (intermediation) parameter foregrounds the @abriendomadrid profile (from Madrid City Council participation department), @BarillariM5S (Davide Barillari, Movimento 5 Stelle) and blog @CodigoAbiertoCC.

The dialogue between the general event network and that of #DemocracyLab shows a large number of shared patterns. When there are clear hubs (more influential nodes) and clusters (sets of key nodes at the epicentre of a community), the conversation between democratic cities is open, cooperative and transversal. Some nodes are connected to several communities simultaneously. These nodes, like @iacocoba and @medialabprado, strengthen weak links, building bridges and relationships between different communities.

The network resulting from the #CiudadesDemocráticas event hints at a future of open institutions and asymmetric, international and transversal dialogues between the many players in search of new horizons for citizen involvement.