From post-capitalism to collective intelligence

“I’m an older lady, an occasional politician. What’s a mayor? I’m just an ordinary citizen that happens to lead the city of Madrid.” Manuela Carmena, mayor of Madrid, and Wikileak’s founder Julian Assange gave the two keynote addresses at the “DemocraticCities” international conference that took place on Friday and Saturday at the Reina Sofia Museum. The meeting was organized by D-CENT Project, in cooperation with MediaLab-Prado. Paving the way for this event, the rest of the week we took part in #DemocracyLab, and sessions, presentations and workshops about direct democracy, citizen participation, commons networks and free software. Politics, technology, cities. 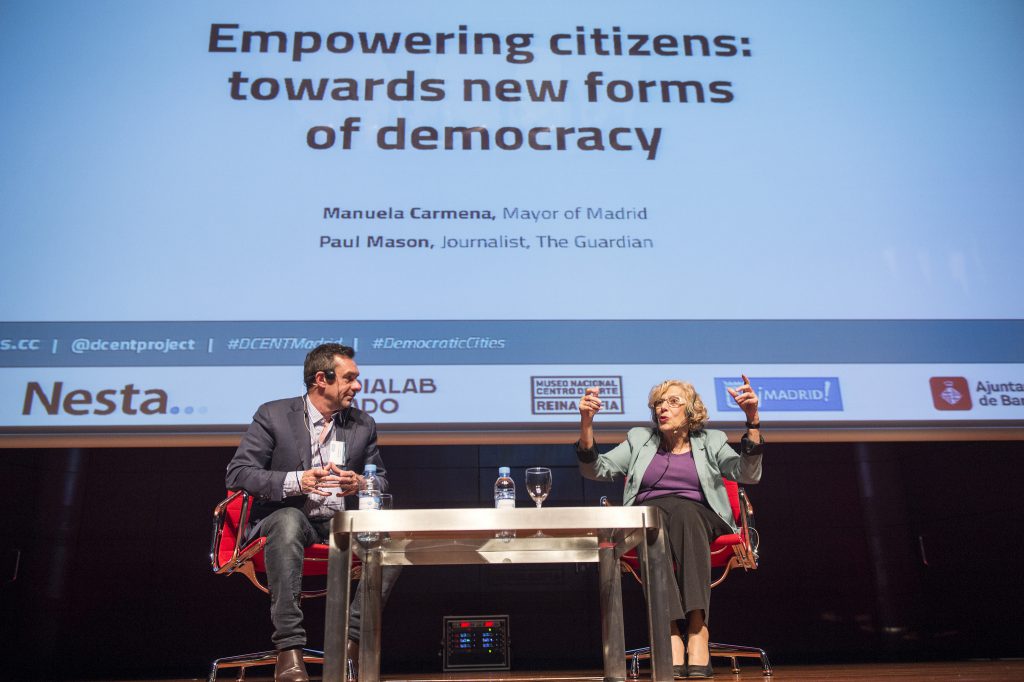 The city and its spaces, participation, shared management, citizens, our politicians, the technology that allows us to be connected as networks, post-capitalism, universal income, the uberization of the economy, data as a business, referendums, neoliberalism, tools to democratize cities, citizen innovation, commons networks, Wikileaks, and the Mayor that wants to remain an ordinary person… All of these matters, and some other too, is what Democratic Cities is about.

Friday’s sessions were as intense as they were diverse. Together with the aforementioned interviews/conversations between Carmena and Assange, several conferences and three discussion panels took place. They explored private property and capitalism, democracy, the economy, technology, security and privacy, or democratic participation systems as direct democracy activism. “I try to redefine politics,” said the Mayor, “because real change means modifying the structures; the time of laws as we know them is gone.” During her talk/conversation with Paul Mason, journalist for The Guardian, Carmena reminded us that “power has always left viruses behind,” and warned –along with others– about whose hands technology is in. “We must be careful: we political administrators should be the ones determining technological needs, and not the other way around,” she concluded. Many eyes and ears listened carefully to this woman who is leading a whole new way of doing politics bottom-up. Yesterday, she sent a message to the young: “You’re the generation that will change this country’s state of affairs and will build a different kind of democracy.” The Mayor stressed an unusual topic in political discourse: “Aesthetics and the citizens’ desire for happiness must be taken into consideration.”

A few minutes later, from the Ecuadorian Embassy in London (where he remains confined), Julian Assange had a conversation via streaming with Pablo Soto, a Citizen Participation and Transparency councilor in Madrid. The Wikileak’s founder talked about the TTIP (concerning which Madrid has declared itself a free city), the civil upheavals in the Arab world, the 15-M and other global mobilizations, and the corruption cases uncovered by Wikileaks, laying greater stress on something that did not go unnoticed: “Protesting is not enough, we must break the power structures.” Assange insisted on the lack of freedoms and the risk implied in the fact that private companies own the technology. Soto recalled that Assange’s arrest was illegal and asked for his release. He left with a rousing goodbye to a moved audience that answered: “Don’t give up, we look forward to seeing you back in Madrid!”

Raquel Rolnik, Brazilian expert in urban politics and housing, did not mince words: “Public space can’t become the State’s private property,” and “Financial capital is the real cloud that’s razing the planet”. Rolnik openly criticized the Smart City model because it reduces citizens’ public space, and sent a powerful, poetic plea against neoliberalism: “We’re at a time of commons-building; we need imagination,” she concluded.

“We have to build consensus,” said Paul Mason. “We need an alliance”, footnoted scholar and activist Trebor Scholz in a discussion panel around post-capitalism and the need to create new political and economical frameworks. The journalist pointed out how the TICs facilitate a utopian socialism, as philosopher Francesco “Bifo” Berardi noted: “Capitalism is dead, but we live inside its corpse and we haven’t found a way out. From Madrid, things look promising but the dark side is that a sovereignist, nationalist front is emerging.” “Precarious employment isn’t exactly empowering,” said a brilliant Francesca Bria, whose statement revealed a not so evident fact: “Silicon Valley is interested in universal income because it will allow them to get rid of the welfare state.” So how do we transit from capitalism to a post-capitalism, and not to a new version of feudalism? Scholz’s presentation added reality bites on the economy’s uberization and the new digital cooperatives arising in New York. “We have to build open platforms that allow cooperation through technology, and develop a collaborative economy that restores the priority to workers.” 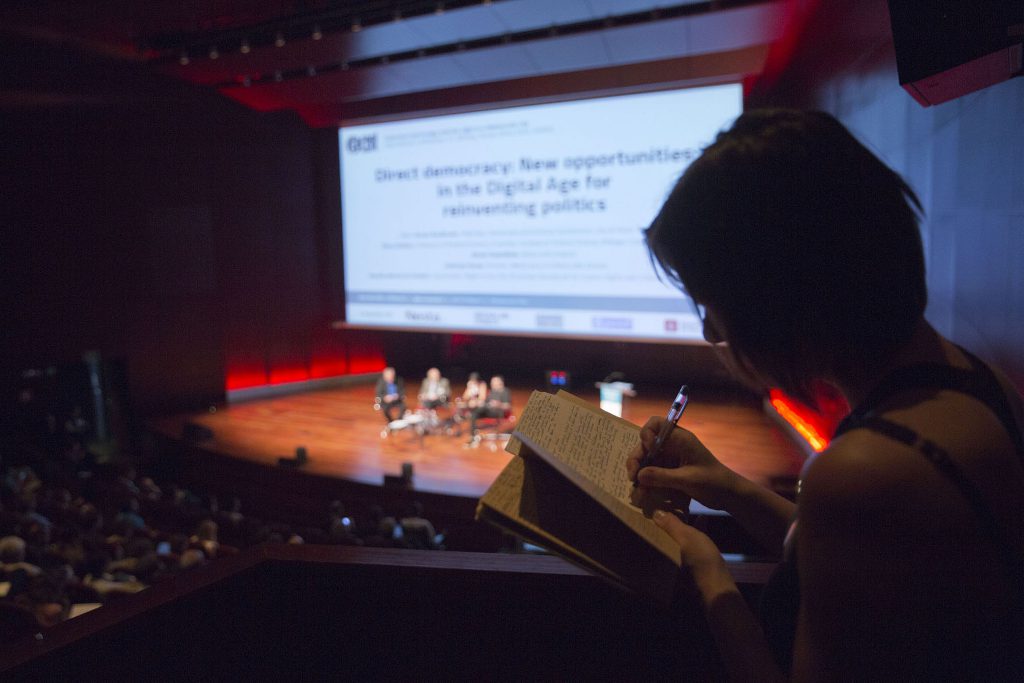 Many things end and many others begin. How do we find the autonomy needed to re-program society? Andreas Gross was there in spirit when Bruno Kaufmann, president of Falun’s Democracy Commission (Sweden), reminded us of his definition for democracy: “It’s like looking at yourself in the mirror and not liking what you see, and not breaking the mirror but trying to improve it.” In the debate “New Opportunities for Re-Inventing Politics in the Digital Era,” the urbanist Adam Greenfield asked rhetorically: “What does being and individual mean?” And Kaufmann asked: “We need more direct democracy. What’s the next step?” Further questions and proposals arrived from Evgeny Morozov, who critiziced Facebook’s feudalism and its personal information policy: “If citizens were actually in power, how would we establish a common property regime for this information?”

Councilor Soto closed the session thus: “It’s stimulating to see people from all over the world here kindling collective intelligence. And do you realize that this is happening in a museum? Anything is possible in Madrid.”